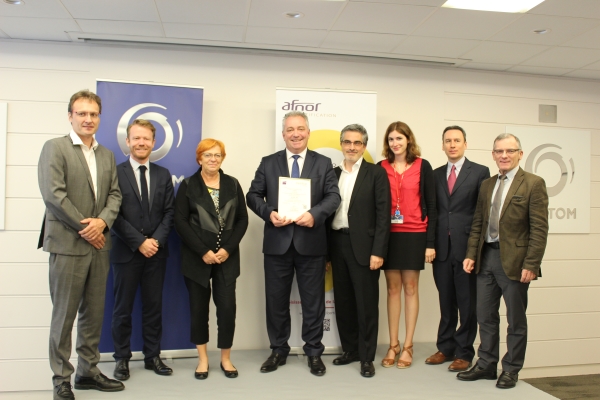 Michael Julian, in 5th position starting from the left, Chief Compliance Officer of Alstom, during the certification ceremony based on AFAQ ISO 37001 standard on 13th of July 2017. ©AFNOR/DR

Alstom, a world leader in mobility solutions, was ISO 37001 certified in June 2017 – a milestone in France! Michael Julian, Chief Compliance Officer, reflects on this distinction, which certifies best practices against corruption.

Why did you seek ISO 37001 certification, based on the voluntary standard of the same name published in October 2016?

Alstom’s business operates throughout the world and especially on public markets; it is therefore exposed to a very high risk of corruption. It’s especially dangerous since hundreds of millions – even billions – of euros are at stake. The group has been working on ethics and compliance for a long time. So our Code of Ethics, in effect since 2001, and our Integrity Programme have strengthened over the years.  The Ethics and Compliance (E&C) department works on, among other things, combating corruption, safeguarding personal data and overseeing the sanctions regime. ISO 37001 certification, which allows us to highlight our compliance efforts both internally and externally, builds on this dynamic of improvement.

How did you manage to coordinate certification across seven sites?

We took a step-wise approach: first France, with the Valenciennes site and the Saint-Ouen main office, plus six other sites in Europe. Each year, a new region will be added – it’ll be Asia-Pacific’s turn in November. All regions must have received the certification by 2019. It is a company-wide initiative led by our CEO and it goes well beyond just the scope of the E&C team. All departments are taking part: HR, legal, finance, sales, communications, etc. A pre-audit was conducted at the end of 2016 to learn about the expectations of the standard, our strengths and weaknesses. A one-day informational and preparatory meeting was held at each site.

What challenges did you face?

Between 2012 and 2015 the World Bank helped us to develop and strengthen our compliance plan. So the right processes were already in place. Yet we were lacking in management of the documentation of processes – in other words, the ISO aspects. However, the drive and support at the highest level of management were critical. There was excellent teamwork in-house and rewarding dialogue with AFNOR auditors, who were just great.

How did the audit proceed?

We learned a lot from the AFNOR Certification auditors, who were very patient as the E&C team was learning the ISO processes. There was good communication, a good level of dialogue on all subjects, even when it was hard to find middle ground. We always found a solution! The main thing was interpreting the requirements of the voluntary standard, which can seem very theoretical since it’s so new, and figure out how it concretely applied to an actual company process.

What are your expectations for this certification now?

We’re going to continue the ongoing improvement process inherent in the compliance plan. We would like this voluntary standard to be applied throughout the world. It’s a great initiative from ISO that offers a firm foundation for enterprises’ compliance around the world, and attests to their soundness with an objective and impartial seal.

“From the start, we could see that the two cultures involved had had little dialogue up to then: compliance, with lawyers versed in the rules to fight corruption, and management system specialists. The audit was prepared with a pedagogical dimension. There was no restriction on what we could look into, no reservations. I appreciated Alstom’s openness, involvement and ability to cooperate and collaborate. They proved to be very transparent about their systemic weaknesses. The issue of corruption is not taboo in the group, which, after a conviction on this count in 2014[1], implemented a prevention system it can be proud of. Getting certified ISO 37001 shows that Alstom is improving. And if the enterprise is struck again, this will prove its good faith on the subject. That’s what counts from a legal perspective. Not to mention the political issues and the image of being the first ones certified on the basis of this brand-new voluntary standard. Of course, this does not guarantee that an employee won’t slip through the cracks, or that prior events can’t be settled years later. In particular, we recommended that Alstom tailor its fight against corruption country by country, which right now is too general. Indeed, the degree and type of corruption truly varies depending on whether you’re in Europe or in developing countries. ”

[1] In December 2014 Alstom was fined €630 million by the U.S. government for corruption in Indonesia, Egypt, Saudi Arabia, the Bahamas, and Taiwan.

Three years after reaching the “Confirmed” rating, the Pierre Fabre pharmaceutical and dermo-cosmetics laboratories have achieved the highest score in the AFAQ 26000 assessment thanks to a sophisticated CSR policy, marking a first for a company with over 10,000 employees.